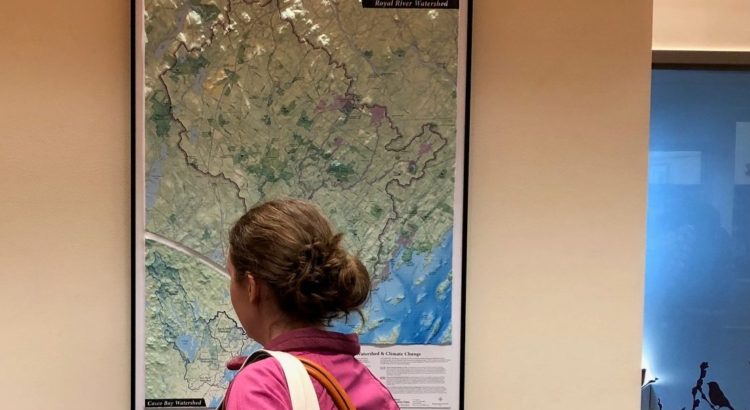 To provoke dialog about climate change, the Royal River Conservation Trust produced three-dimensional relief maps of the Royal River and Casco Bay watersheds. The maps hang in the New Gloucester and Gray and Yarmouth public libraries, and Pownal and Yarmouth town halls, and are available for lending to schools from RRCT’s office in Yarmouth. The map includes information on predicted landscape resilience in the face of climate change, as mapped by The Nature Conservancy. This information is increasingly helping RRCT strategize our land conservation priorities.

“Identifying parts of our watersheds with more diversity, and therefore potential for landscape resilience, is an important step to guiding a long-term future for our forests, streams, coast and wildlife. As the developer of the Resilient and Connected data and maps, The Nature Conservancy fully endorses this approach to landscape conservation. The next step is the protection and stewardship to keep those diverse areas as ecologically healthy as possible. The Royal River Conservation Trust is making great strides for this future with guidance from good data and sustained conservation action.” Andy Cutko, Director of Science, The Nature Conservancy in Maine

Resilience: What It Is and Why the Royal River Watershed Stands out

Within the larger Casco Bay watershed, the Royal River watershed stands out for its significant remaining resilient land, streams and coastal resources.

The estuaries and saltwater wetlands of the Royal, Cousins, and Harraseeket Rivers are identified as having regional and statewide significance in the face of climate change.

Lasting conservation depends on continuing to identify and protect resilient and connected landscapes.

The Nature Conservancy: A Decade of Resilience Research

From 2008 to 2016, The Nature Conservancy (TNC) identified resilient lands and significant climate corridors as part of their Resilient and Connected Landscapes project. TNC’s recently completed Coastal Strongholds Project predicts the ability of rare coastal habitats to escape rising seas and continue to provide vital services to people and wildlife.

TNC’s website includes all of the data RRCT used for its maps, and more: TNC Resilient and Connected Landscapes

The Resilience Score on the maps estimates the land’s capacity to maintain species diversity and ecological function as the climate changes. Lands with Above Average Resilience will have enough variability and micro-climate options to enable species and ecosystems to persist in the face of climate change and will maintain this ability over time. The score is determined by evaluating the site’s landscape diversity and local connectivity. Much of the Royal River watershed falls into this category.

Coastal Resilience of the Royal River watershed, depicted in mauve on the maps, refers to the capacity of coastal ecosystems and species to persist and adapt in the face of climate change, particularly the accelerating rates of sea level rise and more intense coastal storms. Elevation, geology, landforms and barriers affect coastal resilience, as do tidal range, estuary type, and availability of sediment. Coastal areas with slightly above average, above average or far above average resilience to a six-foot sea level rise scenario are grouped together. The estuaries of the Royal River in Yarmouth, the Cousins River in Yarmouth and Freeport and the Harraseeket River in Freeport all fall into this category, along with Staples Cove in Freeport.

Riparian areas, depicted in purplish pink on the maps, are the zones along water bodies that serve as interfaces between terrestrial and aquatic ecosystems. High-scoring riparian corridors are ecologically intact and resilient and will accommodate the anticipated concentrated movement of species populations in response to climate change. These corridors will offer micro-climate refugia that are significantly cooler and more humid than immediately surrounding areas. Chandler Brook, Thoit’s Branch, Runaround Pond, Chesley Meadows, and other tributaries of the Royal River are highlighted for their predicted resilience.

TNC digital source data along with lots of other information is here: TNC Resilient and Connected Landscapes