Owned and managed by Maine DIFW and the Maine Woodland Owners Land Trust respectively, Chandler Mill Pond and surrounding woodlots including Little Hill & Snows Hill in New Gloucester include one of the Royal River’s few headwater ponds as well as small hills and Royal River shoreline. The 47-acre pond sits on a 117-acre forested DIFW parcel and has a hand-carry boat launch for water access, with a wheelchair accessible path leading to the pond and launch. The pond is near New Gloucester’s growing Upper Village, and just miles from the Auburn city line. Chandler Mill Pond and its immediate watershed are nearly entirely undeveloped (except for I-95); the pond supports a high quality trout fishery with free public access. The pond is very productive and has produced exceptional fishing for brook trout, including trout of noteworthy size. Since 2007 the pond has been exclusively managed for rainbow trout.

Maine DIFW in 2018 constructed a modern parking lot on Snow Hill Road to access Chandler Mill Pond. The parking lot connects to a hand-carry boating, fishing, and skating access point on the pond by means of a 1000-foot paved wheel-chair accessible trail. Also, a very informal woods trail begins at the parking area and follows the edge of the pond to Chandler Mill Road.

From New Gloucester’s Upper Village head northwest on Bald Hill Road from Route 100. Continue straight for 0.3 miles. Turn left on Shaker Road/Snow Hill Road for 1 mile. The turn off to Chandler Mill Pond’s boat access parking lot will be on your left, soon after the Turnpike underpass.

Chandler Mill Road’s shoulders also provide parking for off-trail excursions up 531-foot Little Hill. There are no trails up Little Hill. Please respect all postings of all abutters. Scroll to the next tab on this page for more information on exploring Little Hill.

Through a gift to the Maine Woodland Owners land trust in 2019, much of Little Hill is now conserved land open to the public for exploration and traditional uses. While there are no formal trails, there are many logging roads and most of the woods are open and flat for easy exploration. While there is little or no view at the summit of Little Hill, the hill is interesting exploration for reasons of small ice cliffs and a rare black gum forest. Please always use judgment and reliance on personal navigation skills when travelling off-trail.

The south-easterly face of the hill — mostly private land — is distinctive because of short steep cliffs that are sometimes suitable for ice climbing.  From the summit, if you continue further south-westerly along the ridgeline, you’ll reach the rare pocket swamp.

The map in the tab above shows the extent (limited) of conservation ownership on Little Hill as of April 2020. The map in this tab (below) shows the location of the pocket swamp partially on conserved land. The pocket swamp hosts an exemplary (S2) northern-most example of a black gum (tupelo) forest, among the oldest trees in Maine with core samples exceeding 400 years. 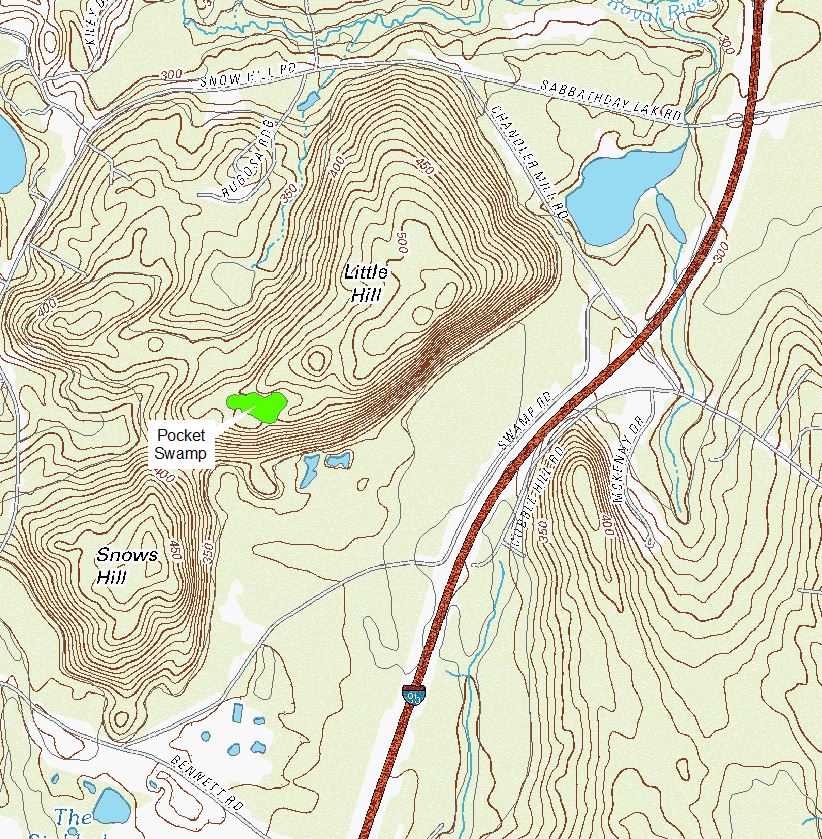 The long-time landowners Chandler Brothers transferred the Chandler Mill Pond parcel to the Maine Department of Inland Fisheries & Wildlife (DIFW) on March 22, 2016. The parcel has thus become a state wildlife management area, managed for its exceptional fishery. A portion of the appraised value of the parcel was donated; the remaining appraised value was paid for by DIFW using federal Dingell-Johnson Act sport fish restoration and boat access funds. RRCT played various important roles to assist with project management.

RRCT, with the unanimous support of the Town of New Gloucester selectmen, initiated a re-naming process with the US Geological Survey/US Board of Geological Names (USGS/USBGN) to formally name the pond “Chandler Mill Pond” consistent with its historic name. On May 9, 2019, the name was officially and legally changed by USGS from “Lily Pond” to “Chandler Mill Pond.”

Here are some historic photos of the Chandler Mill.

Below are excerpts from 2018 submissions to USGS, prepared with the help of Chandler descendants:

“The Royal River Conservation Trust recommends honoring Charles Peleg Chandler who was born on August 14, 1857 and passed away on November 1, 1926.

“He and his three brothers bought the mill from their uncle in the 1890s and were known as the Chandler Brothers.  However, Charles Peleg soon bought out his brothers and it became his operation on the Lily Pond.

“What has impressed us were the things he did for the business and for the community. Sawmills of that era ( late 1800s to early 1900s) were often just seasonal operations. His mill was enclosed and multi-storied in order to run year round which provided a steady source of local employment. They made a great deal more than just dimension lumber including wooden rowboats. On site was a boarding house to provide housing for employees…as needed. They carried items needed locally that essentially made the mill a hardware store for the community.  He also had many interests that provided local employment.  He farmed, raised cattle, chickens and grew a variety of crops.  Much of the hay reached the Boston market via the local railroads.  He fired the steam driven sawmill with waste wood and sawdust.  Excess sawdust was sold locally for home heating. And today we think pellets and the use of waste wood is a new idea?! He also started the first telephone company here in New Gloucester and likely the initial thought was to communicate with the mill from his home in Lower Gloucester. The company still exists as OTEL in its current iteration.  In reading old correspondence he communicated with the Department of Agriculture in Washington D.C. in the early 1900s expressing concern over the future of White Pine in Maine. Another example of his forward thinking and concerns for the environment.”

Charles Peleg Chandler’s great-uncle (many generations back) was Judah Chandler, one of the first settlers of Durham who built the dam at Runaround Pond and after whom Chandler Brook is named. Read more about Judah on RRCT’s Runaround Pond page.

In 2018, Chandler Brothers announced the spectacular donation of more than two thousand acres of forestland in New Gloucester to the Maine Woodland Owners Land Trust, including much of the land surrounding DIFW’s new Chandler Mill Pond WMA.

Leave No Trace: Carry-In-Carry Out

Please plan to pack out your own trash as well as any left by others to improve the experience for everyone.