Owned and managed by the Town of North Yarmouth and acquired with the financial support of Royal River Conservation Trust members and donors, Chandler Brook Preserve is a 65-acre property that borders Chandler Brook, one of the major tributaries to the Royal River. The preserve features 2.9 miles of trails that follow the brook and surrounding fields. The property also includes remnants of an old farm, including two large hay fields and a hemlock forest. This preserve provides excellent bird-watching opportunities and is home to abundant birdlife, wildflowers, hemlocks, and woodland animals. The open fields and trails are popular for equestrians. Click HERE for information about paddling the segment of Chandler Brook that is adjacent to this preserve.

Visitors will find well-worn, natural paths in the forest and along the brook. These trails connect to the mowed paths around the perimeter of the fields, and connect the upper and lower fields. Some of the lowland trails can be wet in sections after heavy rains and in the spring. 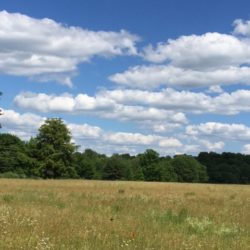 Below is a narrative put together by RRCT member and Master Naturalist Karen Massey:

Chandler Brook Preserve oﬀers a variety of habitats and rewards a nature walk at any time of year. The focus here is on what one might see in spring and summer – May through July. Especially in early spring, but any time in the North Meadow there are likely to be wet patches, so waterproof footwear is advisable.
As you exit your car in the small parking lot, look in the meadow to the north and listen for the sights and sounds of bobolinks that nest both here (private property) and also in the larger meadow that is a part of the Preserve and its trail system. Cross the railroad tracks to enter the Preserve and trail system. Phoebes have been seen nesting in the kiosk at the trail head. Bear left at the ﬁrst fork which takes you through hemlock woods and past a pole barn. On either side, look for ferns: lacy Wood ferns, Lady Ferns, Cinnamon ferns, three-branched Bracken Ferns.
You’ll then enter the North Field and bear to the right. There are many birds to see and hear in this moist meadow, such as warblers, ﬁnches, and chickadees. There are many more ferns, too – especially Sensitive ferns, so called because they are quite sensitive to cold and tend to yellow and die oﬀ at the ﬁrst frost. These ferns do not have spores on the backs of the fronds, but have a separate fertile frond that does not look fern-like at all -more like beads on a stick, deep green when newly emerged, but the older brown ones are more commonly seen. As you cross the shallow stream in the meadow look for American toad eggs – or look and listen for the toads themselves.

As you begin to exit the meadow up hill into the woods, look to the left for the Ostrich ferns. These are shaped rather like a peacock feather. In spring before they are fully open, like all ferns they are in crozier shape – or ﬁddle heads. Please leave them for all to enjoy. Do look for the separate fertile fronds of these ferns too, somewhat similar to those of the Sensitive ferns. Look for blue ﬂag iris here as well.

In the early spring you may also spot trout lilies here with their yellow ﬂowers and speckled leaves or, somewhat later, in May or early June a green and purple jack-in-the-pulpit with its three large leaves. In September, after the spathe (Jack) is gone there will be a cluster of bright red berries. There are other types of ferns as well. Look for Interrupted ferns, with their fertile sections in the middle of some of their fronds (not all), Narrow beech ferns and other wood ferns. Look for broad-winged damsel ﬂies that sometimes frequent this area. The ebony wing damsel ﬂies with their iridescent blue-green bodies and black wings are quite beautiful.

The woods provide deep shade. You may hear an ovenbird calling “teacher, teacher, teacher” and there are signs of beaver in the brook. You can come oﬀ the Brook trail and onto the South Field loop trail in a couple of spots. The South Field is a wonderful place to spot the bobolinks and the ﬁeld is preserved as habitat for these ground nesters that are our longest distance migrants arriving from their wintering grounds in Brazil and Argentina. Look for the male bobolink’s “backwards tuxedo” – black breast and white back, a unique combination- as it ﬂies across the meadow. Listen for its unusual wandering song that has been compared to the sound of R2 D2. The female is much more drably colored in grays and browns. You may see swallows, hawks, and other birds here as well.

In late June the meadow is yellow with buttercups and yellow-rattle. While these predominate, there are also clovers, grasses and rushes, cow vetch, madder, stitchworts, ox-eye daisies, and yarrow, to name a few. You may see “spittlebugs” throughout – the sticky bubbles covering the nymphal stage of froghopper insects. Surprisingly, as this meadow is fairly dry, there is another profusion of sensitive ferns here, though they tend to be smaller than in the North Field.

There are various moths and butterﬂies in the meadow, but later in July is the time to see common wood nymphs with their two eyespots on each forewing and the day ﬂying Virginia Ctenuchid moth, which has dull brownish wings but a striking blue-green metallic body and orange head. Follow along the meadow edge and keep your eyes and ears open for other ferns, ﬂowers, ﬂowering shrubs, and birds. You might be greeted by a song sparrow or a rose-breasted grosbeak as you circle back. On your return you pass through another short, shaded area back to your starting point.